Glengoyne Cask Strength Batch No. 007 boasts a fruity, malty flavour profile, featuring notes of cinnamon, orange, peaches and honey. Its warm amber-gold hue is imparted from time and wood alone. This commitment to natural colour is only possible because of Glengoyne Distillery’s world-class wood policy which sees sherry casks embark on a 6-year journey before Glengoyne’s new-make spirit is filled into the oak.

John Glass, Malt Master at Glengoyne Distillery, said: “The bourbon parcel we used in the distillation of Glengoyne Cask Strength Batch No. 007 brought in a sweetness and a burst of vanilla, which adds a roundness and depth to this sherry-dominant whisky. The bourbon plays a light, but important, part in the overall cask recipe.”

“Glengoyne Cask Strength Batch No. 007 has an intense burst of flavour, yet it retains the sweet and fruity character for which Glengoye’s collection of Highland Single Malt Whiskies is renowned. As with all six in the series before it, Batch No. 007 is a whisky of the purest quality, bottled un-chillfiltered, straight from the cask, having been distilled in the same unhurried way for which Glengoyne is loved.”

Glengoyne Cask Strength Batch No. 007 retails at £59.99 per 70cl bottle, and is available to purchase at www.glengoyne.com 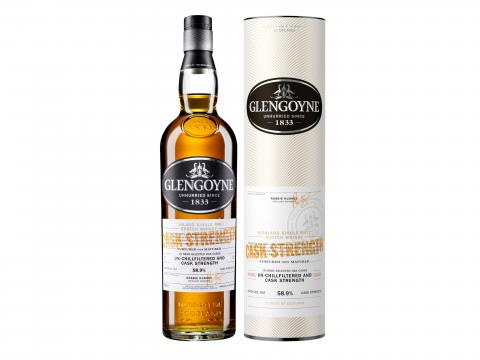